Ryan Maue, a meteorologist for WeatherBell Analytics, told the LA Times 10 trillion gallons of rain would fall on California in the next week, enough to fill 15 million Olympic-sized swimming pools or to power Niagara Falls for 154 days.

Several stories about the torrential rain in California make it sound serious and spooky from afar. One story noted that all of the diminished reservoirs had been refilled. "After five years of drought, a series of storms have filled state reservoirs. California's Sierra Nevada mountain range is also loaded with snow. Runoff from its snowpack normally supplies about a third of the state's water."

Apocalyptically abundant fire and water -- often the journalistic menu for Calif. -- and I keep waiting for the oy-veh Christians who prophesied meteorological calamity due to Roe v. Wade or other blasphemical adventures ... how come they're not out there saying "See??? We told you so! And YOU'RE going to be left behind...!!!"

Maybe they all got washed out to sea, but that hardly seems fair after all their dutiful, hymniferous caterwauling. 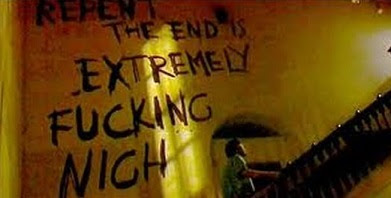