Britain is facing a level of threat from Islamic State militants not seen since the IRA bombings of the 1970s, according to Britain’s new terror chief.
Max Hill, one of the country’s leading terrorism prosecutors, warned that Islamist extremists were planning “indiscriminate attacks on innocent civilians” on a scale similar to those staged more than 40 years ago by the IRA.

Will someone do me the favor of reading the article from which the above quote is extracted and point out a scintilla of concrete evidence supporting the dire warning? I'm not saying it is not true, but I am sick of having my intelligence insulted by bureaucrats anxious to do -- and more important hold onto -- their jobs by foreseeing a future no one can see.

I see in this framework, which is so tantalizing in many countries, a willingness to spurn the defense of the country by asserting a patriotic defense of that same country. Britain, in this instance, is somehow defended because someone can point out the threats it faces .... without pointing out the threats themselves ... but rather relying on the trustworthiness of people in nice clothes.

Where is the seriousness in all of this. Solemnity abounds as diminishing democracy oozes in beneath the front door, but, to repeat, no one can see the future, no matter how much money and how many swat teams and how much militarization of police forces and how much frisking of people who don't think like me goes on.

It is easy to see how so-called militants (who really do some heart-rending stuff) can gain converts as the handcuffs of 'democracy' tighten. 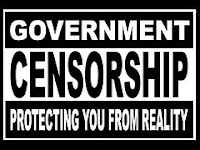