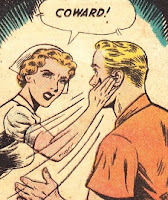 WASHINGTON (AP) -- President Donald Trump, who has been criticizing the news media and is famously thin-skinned, says he won't be attending the White House Correspondents' Association dinner - sparing himself the dubious honor of being an in-the-house target of jokes.
The annual fundraiser for college scholarships and venue for reporting awards mixes politicians, journalists and celebrities and is typically attended by the president and first lady. Remarks by a comedian, often roasting the president, and a humorous address by the president himself, often roasting the press and political opponents, have highlighted the event, which C-SPAN has carried live.

Can a man who can't laugh at himself be called a man? To me, this single evasion tells more about Donald Trump than many of the other public criticisms combined.
Posted by genkaku at 10:06 AM