The BBC's explanatory information accompanying a photo-contest entry read like ... I'm not sure what:


In order to enter the priesthood in the Orthodox religion in Russia, you must first become a monk or get married. Here Vladimir marries Vittoria. This photo taken by Francesco Comello was part of a series which won third prize in Daily Life (Stories). 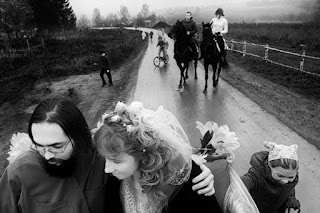 Among the winners of the World Press Photo 2017 contest was the picture above. I wouldn't be so confused if I simply looked things up, but since confusion -- who's married, who ain't and what difference it might make -- is more the norm these days, I think I'll leave it alone. Still, I do feel a bit as if someone had told me to become a mahout if I wished to drive in Monaco's Grand Prix.
Posted by genkaku at 5:12 PM