And you thought "Downton Abbey" was a scrumptious fiction!?


In April 1939, Doreen Bates presented Bill Evans, the man she had been seeing for six years, with a sheet of paper. It listed, in two neat columns, the pros and cons of having a baby together.
What made the list unusual was that Bill was married to someone else, and would remain so, until his death in 1974.
Amazingly, Bill agreed to Doreen’s plea to start a family. And, after the birth of twins in October 1941, he spent every other weekend and summer holidays with Doreen and the children.

I find it increasingly fascinating, in tales of the well-heeled on that side of the pond or this, to wonder ... 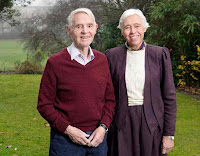 Where does the money come from. Nannies and housekeepers and lands and gardens and summer homes and kids and ... where does all the money come from. The issue of money is passed over and somehow assumed. Would a tinker be able to make such cordial, if socially unusual, arrangements?
Posted by genkaku at 10:29 AM