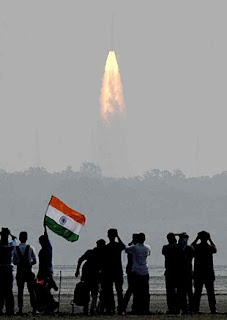 India’s space agency has announced the successful launch of a record-breaking 104 nano satellites into orbit, all onboard a single rocket.
The Indian Space Research Organisation (Isro) said the milestone launch, from the Sriharikota space centre in the country’s south, overtook the 2014 Russian record of 37 satellites in a single launch.
On board was a 714kg satellite for earth observation and more than 100 smaller satellites weighing less than 10kg each. Three were Indian-owned, 96 were from US companies, and the rest belonged to companies based in Israel, Kazakhstan, the Netherlands, Switzerland and the United Arab Emirates.
Most were owned by Planet Labs Inc, a US-based Earth-imaging company.

I wonder: Once everyone knows everything, what will they know and will it be a good thing or a bad thing?
Posted by genkaku at 8:52 AM