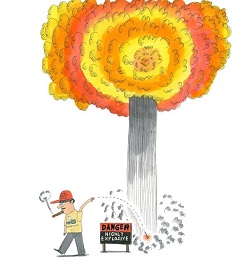 Today, as every now and then, I was one among 37 recipients targeted by a well-intentioned emailer who seems to presume that I will be interested in yet another fucking analysis of the current zeitgeist of angst. This article, from the ever-so-straight-seamed Boston Globe is entitled "How the Baby Boomers Destroyed Everything." I guess what I really resent is that in fact I do wish there would be some easing of the economic and social and moral strangle hold ... but hope just makes the war more likely, I think, and the futility is galling.

Well, I've done my frothing. There's nothing saying I have to read the well-intentioned emails that come my way, but I resent the implication that I might suspect some scintilla of hope or usefulness resides in such essays.

People are getting hurt. If Donald Trump can get used to it, so can I, I guess.

Scumbags unite!
Posted by genkaku at 11:11 AM