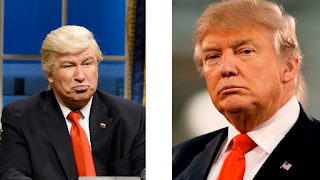 Feb. 11 (UPI) -- A Spanish-language newspaper in the Dominican Republic mistakenly ran a picture of the actor Alec Baldwin from Saturday Night Live in place of a photo of President Donald Trump.
The newspaper El Nacional issued a correction Friday, but not before the image went viral online.


The United States Tennis Association (USTA) has issued an apology to their German Fed Cup opponents after singing the wrong version of their national anthem.


With so much information floating around, what is in error seems to be gaining ground fast on what is not in error. A faux Donald Trump appears to be more substantive and credible than a 'real' one.
Posted by genkaku at 11:15 AM