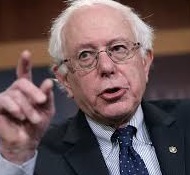 I sent the following to the newspaper several days ago. It is sloppy, but I thought they might use it. Now, it appears, they won't:


Before Bernie Sanders finally falls off the flat earth that is American politics, I for one would like to say a farewell thanks: He, at least, had the self-immolating nerve to raise issues that affect the country I live in.


Education, climate, disparity of wealth, jobs, and a host of other issues that play out quietly where the applause is stilled and individual voters secretly care -- these have been among his offerings. No klieg lights, no confetti -- just a realm in which the good of the country and its citizens comes first.


Of all the people who helped Hillary Clinton become the first woman president of the United States, I would say Bernie Sanders and Donald Trump are first in line. Sanders held the bright torch that Clinton tried and failed to co-opt with sound bites. Trump's emotional appeal was another sort of national torch -- of anger and confusion and frustration with no clarity and no quarter.


Of course, who knows: Perhaps this implicit prediction is entirely wrong and Trump will gain the day: There is no explanation for the myth that lemmings jump off an equally mythological cliff and likewise American voters may have an inexplicable need to go "wheeeeeee!" as they anoint the acidic boisterousness of Donald Trump. "President Trump" may be the new normal.


Sanders' bright light held out hope for a nation less fractured. Clinton has a sound bite for that, but Sanders touched the quiet passion that unification can engender. As Trump's supporters can attest, passion can override particulars and Sanders supporters like me could feel a longing addressed in his cliff-bound travels.


As far as I can figure out, Sanders did fail in one particular: He never did get the electorate to look up the word "socialism" to find out what it meant when it wasn't busy being denigrated by those who likewise never looked it up.


But in the face of the other good things Sanders did, this failing is minor. Knowing what you are talking about has never been the strong suit in political jousts.


Before Sanders goes off the cliff ... well, I'd like to say thanks.


Live long and prosper, Bernie.
Posted by genkaku at 8:50 AM