apartheid at home and abroad 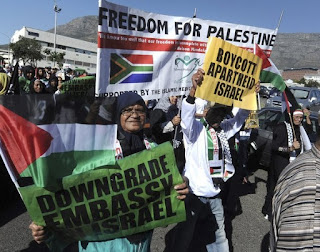 I may be over-mythologizing, but the presidential announcement that America's new embassy would be located in Jerusalem -- a city that both Israelis and Palestinians lay claim to -- strikes me as a savvy-if-cowardly political stroke.


The relocation of the embassy from Tel Aviv, condemned by Palestinians as blatantly pro-Israel, further dimmed prospects of what President Donald Trump had once touted as plans to negotiate the “deal of the century.” The Palestinians seek Israeli-annexed east Jerusalem as a capital.

So far, Palestinians wielding sling-shots, burning tires, and throwing rocks, have suffered almost 60 fatalities and 2,000 casualties as 'beleaguered' Israel shoots live rounds at Palestinian demonstrators along the Gaza wall... and did I hear someone mention the deploying of Israeli tanks?

The relocation of the embassy to Jerusalem set off Benjamin-Netanyahu-friendly rejoicing. America loves Israel and is willing to prove it, autocrat to autocrat. Netanyahu, who is hip-deep in a corruption scandal can point to a big W(inner) under his aegis and divert attention from his apartheid proclivities that he uses to keep his right-wing supporters in line. The embassy-opening gives him the imprimatur to bomb Syria, which Trump might find advantageous when addressing Russia's warm-water-port interests in Damascus.

But stirring the Israel-Palestine pot, creating conditions for still greater conflict, allows Trump and his compatriots who want to get re-elected to divert attention from the tax plan that sucks money away from America's version of the Palestinians -- the working class. December's tax plan is likely to play a role in upcoming mid-term elections, but if there's one thing that can deflect attention from the tax give-away to the well-to-do, it's so-called-patriotism and war and shit like that.

"Venal" and "vile" hardly seem to cover the bases.
Posted by genkaku at 12:02 PM