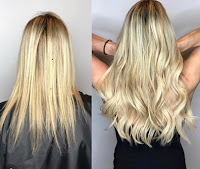 It is probably just another example of how far behind yet another curve I am, but when I was growing up, "falsies" meant the augmentation women might apply to their breasts -- boobs puffed up with cotton or whatever other batting.

Nowadays, in my untutored eye, it seems that every woman on display is wearing false hair -- "hair extensions" as they're called in an apparently endless stream on Google. It's a bit like looking at the latest automobiles that lack originality of design -- everyone with ass-length tresses (and perhaps expanded boobs)... an idiotic feeding frenzy... everyone racing to be like everyone else, the anointed.

Given the long history of wigs, you might think me stupid to wish this trend would go the way of the dodo. I am not quite sure why I find it irritating as a latter-day trend but maybe it's partly the fact that Donald Trump's trophy children and trophy wives all look the same -- flavorless as the bubble gum stuck up under a greasy spoon's counter.