the wiles of curiosity

It seems to me that younger people lack curiosity. That statement alone should put anyone on guard: Everyone's curious, I imagine, but curiosity has implications, not the least of which is the sub-rosa premise that I-don't-know.

For a younger person who may already be floundering in a search for a well-tailored, savvy persona, not-knowing takes the stitches out of the cloth in hand: I'd rather be smart and knowledgeable and together (and thereby happy or at least look that way) than to be ignorant and somehow exposed as weak. 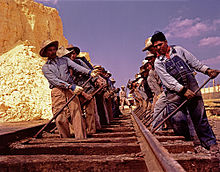 This morning I wondered where the word "gandy" came from in the descriptive role it played among the "gandy dancers." Gandy dancers were usually poor people who needed work and thus hired out to the railroad, straightening ties and rails. The group of (usually, but not always) men used chanting as a means of synchronizing their efforts. Blacks, Mexicans, Chinese, newly-arrived immigrants and yes, sometimes even women.

But who cares what "gandy" means or derives from? I care, because the work was hard and men in need of food money for their families found the pay better than in other venues. They actually did something. An "app" had not yet been fashioned.

Some quick research left me with no fixed answer about the word "gandy." And still "gandy dancer" is a descriptive that tickles my ivories. It has a lilt in its step, for me.

I have a gandy dancer's steel pole out in the shed -- bought it at a tag sale for $2 a number of years back. I love the heft of it and the stories it might tell, even if I lack the ears to hear them or the muscle to wield it. A great tool for leveraging heavy rock, for example.

But who breaks a sweat any longer? Yesterday, my younger son got a part time gig with a landscaper who needed some help. My son came home refreshed from the outdoors, the air, the movement and, dare I say it, the sweat. He said the walkway he was helping to rip up prior to laying a new one was made largely of brick and so he had no need of a gandy-dancer's pole, which I described despite his lack of curiosity.

In the news of late, U.S. President Donald Trump announced yesterday that his country would back away from a nuclear agreement that had been reached with Iran. The treaty, which lifts U.S. sanctions against Iran in exchange for a downsizing of nuclear experimentation, is reported near and far as having been observed by Iran. Inspectors have been allowed on sites. But Trump called it a bad deal and Israel's Benjamin Netanyahu called Iran a liar and ... well, even the first Bush who became president made it clear that he wanted to bring Iran to its knees. I suppose the uptick in potential violence in the Middle East will distract voters from the tax burden that was levied in December and benefits the companies that contribute to Republican causes.


WASHINGTON (AP) — President Donald Trump withdrew the U.S. from the landmark nuclear accord with Iran, abruptly restoring harsh sanctions in the most consequential foreign policy action of his presidency. He declared he was making the world safer, but he also deepened his isolation on the world stage and revived doubts about American credibility.
The 2015 agreement, which was negotiated by the Obama administration and included Germany, France and Britain, had lifted most U.S. and international economic sanctions against Iran. In exchange, Iran agreed to restrictions on its nuclear program, making it impossible to produce a bomb and establishing rigorous inspections.

Donald Trump is a man whose curiosity leads him to wonder about money, and not so much about those who will need to pony up.

Why is it that the longer anyone lives, the more shabby money appears?

... but that's just my question, the question I am curious about.

I wonder if we might reinvent the woodpile behind which dads used to take their erring sons for a good spanking.

Oh wait ... spanking is out of fashion and besides that, it might invoke a sweat.