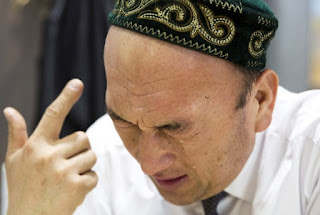 The Nazis had the Jews. The Jews have the Palestinians. The Americans have Guantanamo and fisa court-approved surveillance of those who may, but have not yet, committed 'terrorist' acts. And now there is some light cast on the Chinese ethnic cleansing by "re-education" of Muslims interned in western China.

It enhances central power to pick an enemy and set up a drum-beat while all the time claiming the purest of motives. The Nazis singled out the Jews for a lot of reasons, but certainly one of them was that the Jews laid claim to being the "chosen" people. Nazis, with their Aryan aspirations, could not allow more than one "chosen" group on their block.

Jews shooting live rounds into noisy crowds of tire-burning, sling-shot-armed Palestinians along the Gaza border are said to be, of course, short-circuiting Palestinian threats against Israel -- which has nukes and yet lays claim to a fragility of being that sees non-lethal attackers as threatening its existence. Muslim literature may suggest that killing the Jews would be a righteous act, but the book in which Jews suggest that killing anyone who isn't a Jew remains untranslated and unavailable in English, if I've got that right. (Someone supply the title, please)

America's FBI keeps busy trying to keep up with those who may/might/could create a terrorist problem in the future.


The FBI is pursuing 1,000 investigations into suspected “lone wolf” militants and another 1,000 into “domestic terrorists”, the bureau’s director has told a congressional committee.
Christopher Wray said so-called “lone wolf” terrorists – whom another law enforcement official described as individuals often radicalised over the internet or other social media – are the FBI’s “highest counterterrorism priority”.

The way that they know the problem is kept tightly under wraps and there's no saying how many potential attacks they have thwarted, though every once in a while, some midnight raid will cast light on tactics that presume some nitwit with a big mouth and dubious contacts might actually DO something. Guantanamo Bay prison continues to hold people who have been given little or no recourse to the U.S. legal system that holds them.

And then there is China's approach, as detailed in a longish article about internment camps that sound like the old Cultural Revolution re-education camps under Mao Zedong... people sent off to be re-educated among the farmer populace loyal to Mao ... as a means of centralizing communist power ... of undermining a bourgeoisie that might think a differing thought.


Since last spring, Chinese authorities in the heavily Muslim region of Xinjiang have ensnared tens, possibly hundreds of thousands of Muslim Chinese — and even foreign citizens — in mass internment camps. This detention campaign has swept across Xinjiang, a territory half the area of India, leading to what a U.S. commission on China last month said is “the largest mass incarceration of a minority population in the world today.”...
Internees would wake up together before dawn, sing the Chinese national anthem, and raise the Chinese flag at 7:30 a.m. They gathered back inside large classrooms to learn “red songs” like “Without the Communist Party, there is no New China,” and study Chinese language and history. They were told that the indigenous sheep-herding Central Asian people of Xinjiang were backward and yoked by slavery before they were “liberated” by the Communist Party in the 1950s.
Before meals of vegetable soup and buns, the inmates would be ordered to chant: “Thank the Party! Thank the Motherland! Thank President Xi!”

From afar, it sounds juvenile, all of the apartheid efforts to consolidate power and worship and agreement and the one true faith. But up close, of course, its blowback lands on individuals -- people convinced of one belief or another, people who may or may not have evil intentions, but in any event have come to their conclusions in their own ways, people whose convictions may run counter to prevailing winds and yet challenging those prevailing winds to prove themselves worthy and better.