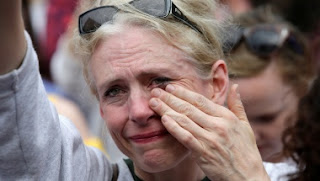 DUBLIN (Reuters) - Ireland’s prime minister on Saturday hailed the culmination of “a quiet revolution” in what was once one of Europe’s most socially conservative countries after a landslide referendum vote to liberalize highly restrictive laws on abortion.
Voters in the once deeply Catholic nation backed the change by two-to-one, a far higher margin than any opinion poll in the run up to the vote had predicted, and allows the government to bring in legislation by the end of the year.