proud of my daughter 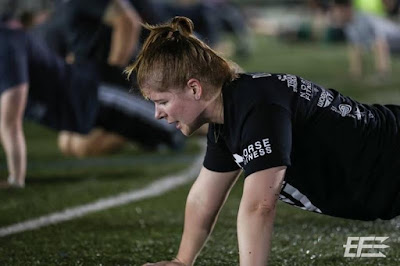 Ever since she sent the photos yesterday, I have been feeling a hard-to-define, deep-seated pride in my daughter, Olivia.

Some will say, "Well d'oh -- she's your daughter," but my half-baked attempts to be a father don't work like that. I have always seen my role as one in which I keep my eyes skinned for dangers and errors that might hurt my children. I don't want them to be hurt by assholes and and I try to turn the volume down when I see them indulging what I consider asshole behavior. Knee-jerk pride is not on my front burner, however much I might wish it were. I love my kids, but somehow protection is the name of my inner game. Not that my approach works, of course, but that's the cut of my jib.

And yet the photos lit up my assembly with pure pride. My daughter -- I guess you could call her a savvy millennial who seems to know how to climb the corporate ladder and navigate its throttling vines -- is willing to break a sweat. The world does not need another millennial flouting all that gear and all those half-masticated answers. And nobody can be a savvy millennial when doing pedal-to-the-metal calisthenics. And that's what Olivia is doing in part at a management seminar this weekend: Roll out of bed at an impossibly early hour, hit the arena and for whatever time period, crank out push-ups, sit-ups and whatever all else under the tutelage of former Navy SEALs. No one has to take part in the calisthenics, but it's part of the seminar which also includes more millennial-friendly classes and lectures.

I figure people capable of exercising a capacity to sweat are smarter and more honest than most, even if they carry designer pocketbooks.

A month or so ago, the first time my daughter took this training and told me calisthenics were an optional part of the training, I told her, only half in jest, that she damned well better get out there and do the exercises, however early in the morning they were. After the first day of that seminar, I got a brief note that said only, "I threw up twice."

There was no similar note this time. Just the pix. And my pride soared. My daughter, who is not averse to a good shopping trip to the millennial mecca (the mall) was willing to break a sweat and I, for one, have a soft spot in my heart for those willing to break a sweat rather than simply expect accolades because of their electronic gear or clothing or certificates or some other millennial chic. She was a good business woman AND she could break a sweat AND she was my DAUGHTER. Who the hell died and left me so lucky?!

Honestly, I cannot describe this feeling, but it feels great ... and I'm proud as punch ... for nothing and for everything ... and it's weird ... and I'm sure glad she's doing what I could not ... all at once. Wubba-wubba... so much for literacy. 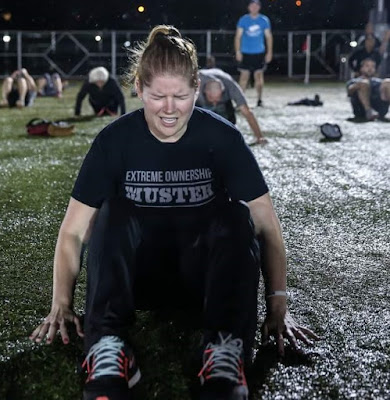