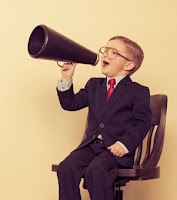 As it strikes me this morning, this is the era of the megaphone: Everyone, based on the leadership of U.S. president Donald Trump, has got one but nobody can find anything to say. Me too.

What's to be done when everyone has a megaphone and no one has anything left to say?

In the president's lexicon, there are endless things that seem to be "very, very" good (think third-grade book report for those who may remember books) and yet what those things are turned to dust under examination. If the president stands for nothing -- will stand up for nothing -- why should anyone else. Everything is "very, very" good unless it's bad ... in which case the blame is placed on someone other than the president. The chief purveyor of "false news" is a leader for one and all these days.

Coal mining jobs that were promised during the presidential campaign? It's not Trump's fault that all those coal miners are still out of work. Tax cut for the well-heeled? Everyone benefits, except those who really don't. The longest war in American history? No problem, except that it is.

Making a "better" deal with Iran? Well, there's some confusion about that, but the downside is all the fault of Democrats and Trump has yet to enunciate his better deal in the same way he and his cohorts have failed to create a new health law that will replace what predecessor Barack Obama cobbled together with a lot of effort.

Who needs effort when you've got a megaphone? I'm no better.

I've got a megaphone and I'm not afraid to use it. I really do wish there were something of substance I could megaphone-ize ... but it all seems to slip away in this era of the megaphone.

What a crass neighborhood we live in.
Posted by genkaku at 8:05 AM