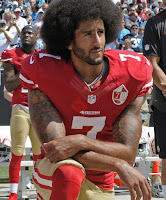 WASHINGTON (AP) — With its decision to ban kneeling during the national anthem, critics are accusing the NFL of prioritizing being in the good financial graces of mainstream America over the social justice passions of its players trying to draw attention to the deaths of African-Americans at the hands of police.
Some opponents of the new policy now vow to never watch an NFL game again. The NFL’s new anthem policy — similar to NBA rules in place for decades — makes the athletes stand for “The Star-Spangled Banner” or be absent from the field while it’s played.
Critics say the league acted without input from its majority-black players and buckled to pressure from some major advertisers and even President Donald Trump, who rallied his mostly-white base against players for failing to display their patriotism, shifting the debate from social justice for minorities to how to act during the anthem itself. Others, including some players, applauded the league’s action or took no issue with the policy.


Is there some graven-in-stone reason that the national anthem should be sung at sporting events? How about deleting "The Star Spangled Banner" from athletic money-makers? Isn't one Donald Trump selling off and selling out his country enough?

Is there anyone out there who is grown-up enough to say that racial inequality is just plain more important than a song and that racial disparities deserve more and more serious attention than some feel-good bit of singing? Of course it won't solve anything to delete the song, but it might be a talking point in a thorny debate.

Since the NFL is stuck between a rock and a hard place, how about doing the right thing and damn-the-torpedoes.
Posted by genkaku at 9:55 AM