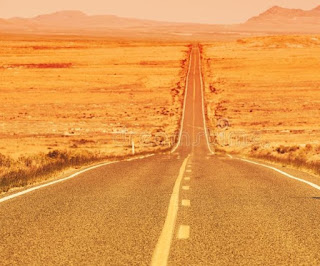 It was a quieter, gentler era, perhaps, one that book-ended my modest history of hitchhiking in America. All told, I reckon I used my thumb to travel something more than 100,000 miles. There were lessons to learn and the one that wafts back this morning is the lesson of tractor-trailer trucks.

Tractor-trailer trucks were looked on with a kind of wishful awe when you stood next to some road in the middle of no where. Tractor-trailers were going long distances and a ride with one of them posed the possibility of taking a big bite of the miles up ahead. But they also had something like sixteen forward gears at the time and a trucker who had cranked himself into one of the higher numbers would be forced to do some serious down-shifting in order to stop for the likes of me. Mostly, I wasn't worth the unquantifiable benefit I might provide as company on the ride. I sympathized with the drivers and did not curse the high-speed, pass-me-by passage of the 18-wheelers.

But that didn't mean I couldn't hope or wish. I could see them coming from afar, glistening in the sun against some straight-as-a-string highway cut into the grasslands of Nebraska or Oklahoma or wherever the hell I was. My wish-machine kicked into action as it drew closer and closer and closer until, at last, it was almost upon me, that great shiny ship headed into the oceans of destinations unseen.

And just about the time I could read the tractor label -- Ford or Mack or even an occasional Volvo -- I could see that I was going to be ignored and learned quickly to turn my back: The passage of such a behemoth at a high rate of speed meant the truck was dragging a cloud of swirling air that lifted the dirt on the verge where I stood and there was a serious concern that that dust storm would blow into my eyes. It was a bit like a bull fight, pirouetting as the tractor passed by my spot with its silvered trailer in tow. Rumble and whoosh and in an instant he was gone. But his back-draft remained. Duck and cover!

For some reason, it pleases me to have this bit of information under my belt. Why? I haven't got a clue. Certainly there is no chance I will ever again have the occasion to use it, just as there is little chance I will need to walk backwards with the same assurance I walk forward or size up the likelihood that a Ford passenger car (small chance) or a Chevrolet (greater chance than a Ford) would pick me up. I never expected a man with a woman in the car to pick me up: Women deserved to be protected. And a woman driver ... well, you had to be careful.

Little lessons piled onto earlier little lessons and I am happy to have them ... for no real reason I can think of. Maybe it's just a matter of having experimented and learned and knew a thing or two ... or anyway thought I did ... based on experience.

Hitchhiking in a military uniform (which I did for the second trip across the country, but not the first) was a definite plus: A lot of male drivers could remember having received military pay and knew how tightly that noose was woven.

The most dream-time ride I ever got was east of Sacramento, California, where a tractor-trailer driver stopped, welcomed me aboard and said he was headed to Boston, Mass., which was very close to where I was headed. A 2000-plus-mile ride.

But the best ride I ever got was good for only 500 yards... in civvies. A brown-skinned man behind the wheel of a battered Ford coupe, pulled over and asked a very-pregnant brown woman to sit in the back. He hardly spoke any English and I hardly spoke any Spanish. His hands on the steering wheel were cracked and calloused. His only adornment was a wedding ring that showed off to good advantage against his farm-toughened hands.

He opened the door, gave me a brilliant smile and waved me in. His wife smiled a little too. They had been long distances themselves, I imagined. But after a short drive, the man realized he was going the wrong way. With pidgen apologies, he explained his error and I got out. His kindness remains with me to this day. Would anyone (a white man, perhaps) have given him a ride? Let alone him with a pregnant wife? Perhaps, but a man with his precious wife with his precious baby ...

A gentler era in retrospect.

I hope the baby was and remains well: S/he comes from blessed stock.
Posted by genkaku at 2:28 PM