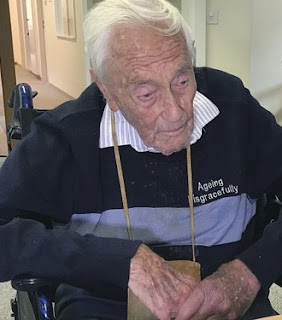 In the past two days, I have taken two of the pain pills I hate taking because they make me dumber in the aftermath than I already would be. Perhaps the pill popping made me sympathetic to the 104-year-old Australian who traveled to Switzerland in order to end his own life.


“My life has been rather poor for the last year or so. And I’m very happy to end it,” Goodall said Thursday in the room where he died shortly after.
The British-born scientist said this week that he had been contemplating the idea of suicide for about 20 years, but only started thinking about it for himself after his quality of life deteriorated over the last year.
He cited a lack of mobility, doctor’s restrictions and an Australian law prohibiting him from taking his own life among his complaints, but he was not ill.

Assisted suicide is illegal in Australia. Switzerland takes a different view. And after a couple of pain pills I hate taking, I bemoan the idea that death is somehow the "ultimate sacrifice" or otherwise crazed. Gautama the Buddha, in one translation of the "Dhammapada," is said to have observed, "All fear dying/All fear death." I wonder if, given the latitude, he might likewise have said, "All fear living/All fear life."

How I wish assisted suicide weren't such a hot-button topic. Those slip-sliding into pill-popping and doctors' prescriptions and endless possible 'improvements' know the weight and know the freight. Things hurt more and other things are less efficient and on top of that, those with whom to share a good dirty joke have often already "joined the majority." Stuff is taken away and taken away and taken away until a little control over this life/death is about all that's left.

No, I am not thinking of running out and slitting my wrists, but I damned sure will continue to lay claim the option ... and understand a little of what the elderly may gnash what's left of their teeth about.


The Swiss federal statistics office says the number of assisted suicides has been growing fast: Nine years ago, there were 297. By 2015, the most recent year tabulated, the figure had more than tripled to 965. Nearly 15 percent of the cases last year were people under 65 years old.

When it comes assisted suicide and those whose nostrums seek to short-circuit the activity, all I can think of is Clint Eastwood's crabby line in "Gran Torino:"