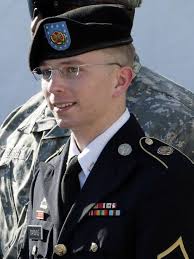 In Fort Meade, Md., the prosecution has offered its closing arguments in the trial of Pfc. Bradley Manning, 25, a man accused of a litany of charges after stealing a cache of secret documents and being arrested in May 2010. He has been in jail ever since. The defense is scheduled to give its closing arguments Friday.

The trial has been largely ignored by mainstream media. Today, however, there was this interesting observation from Kevin Gosztola, a man who, if I am not mistaken, is one of the rare few to attend all the sessions in a trial that touches the bedrock of American freedoms and governmental overreach. The majority of the media that might have defended the public was no where in sight until today:


9:40 AM EST There are 54 members of the media here to cover. The military public affairs have decided to treat us all like we are suspects. A TSA-style checkpoint now exists at the media operations center. It had not been this way previously.
Military public affairs had us all sign “new ground rules.” We had lined up outside the media operations center and waited. I was in line for close to an hour before finally getting inside.
A military police officer with purple rubber gloves began to go through my backpack. I tried to pull as much out of the bag that I could to speed the process. He had wands but that was not used. He asked me if I had any electronic devices and I said no. That was apparently sufficient.
I went to my seat and prepared for court to be gaveled into session. As I waited, for a period, there were military police officers patrolling the aisles checking for anything suspicious.

In the wake of the recent decision in the Trayvon Martin death, people were outraged that the underlying issue of racism in America should have been kept out of the court proceedings. In the case of Bradley Manning there is almost no similar, widespread dismay that the government has accused one of its citizens of doing harm without outlining specific instances and details of what that harm was. Manning is going to jail while the government (and its media) is getting a free ride.

At least in a democracy.
Posted by genkaku at 1:18 PM