Sergei Magnitsky, a man who blew the whistle on fraud perpetrated by ranking Russian officials and 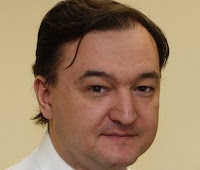 was subsequently accused of a similar siphoning of funds, has been convicted of tax fraud.

He died of ... uhhh ... pancreatitis, although the injuries he sustained while in his jail cell, like the lack of medical care provided, remain unexamined and unexplained.

The situation strikes me as par for the course in realms where big money is involved. Russia, U.S., China ... it's all pretty much the same I imagine. It's not the theft or cover-up that excites people. It's the crudeness with which the Russians executed this routine scam.

Perhaps a rule of thumb should be: Never expect the issue itself to eclipse the matter of whose ox gets gored.
Posted by genkaku at 7:35 AM