Yesterday, Pfc. Bradley Manning, 25, was found guilty of multiple counts relating to the release of thousands of secret documents. The mainstream press has concentrated on the fact that he was not found guilty of "aiding the enemy" (a decision that might have gored their ox ... never mind democracy). The charges he was found guilty of -- including espionage -- carry a maximum potential sentence of 136 years. 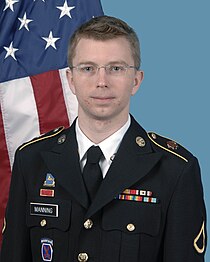 I don't know if anyone is as interested as I am, but here is Kevin Gosztola's live update site on the sentencing phase -- a time when, perhaps, we will hear precisely what damage Manning did in precisely what instances. These details were barred during the court hearing, although, to a mere mortal such as myself, they sound inextricably relevant to any guilt or innocence. In what ways -- when, where and how -- has the United States been significantly damaged (as claimed by Manning's detractors) and did the impact of that damage outweigh the transparency-in-government that Manning's supporters suggest he nourished?

Gosztola's notes are a bit higglety-pigglety, but they have a feel that is closer to raw data than the smoothly-presented stories and analyses offered by a traditional press that did not see fit to sit through the whole of this pivotal proceeding and is wary of offering a moral context that might include the word "democracy."
Posted by genkaku at 12:54 PM