-- I have made hundreds and hundreds of mistakes in my life, but this breath is not one of them. 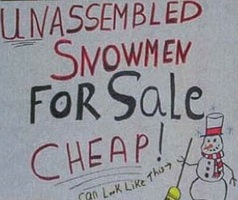 -- If anyone actually did try to sell ice to Eskimos, could there be a better come-on than "Ego te absolvo?"

Absolution -- that time or place or sense that is smooth and enfolding and forgiving as a well-worn pair of blue jeans ... soft in ways that life can be hard, restful at last where sweat once pored down, washed clean in some ineffably gentle you're-OK. Who has not prayed for such a time and who has not, when knowing of that prayer, sold ice to Eskimos? "Ego te absolvo."

Beckoning, beckoning, beckoning ... absolution. Leave aside the salesmen and still there is the beckoning. But being OK seems to require some effort, the kind of effort that salesmen might offer to ease. It doesn't work in any grounded sense, but beggars can't be choosers and there will always be some poor Eskimo willing to shell out for ice.

Hard work. If there is no one who can absolve and no one to be absolved -- if, using language, only you can absolve you -- does that then mean that the yearning and beckoning are all for naught? I don't think so, but what I do mean is probably just selling ice to Eskimos.

-- I wonder if the Internet, like Gutenberg's press, will help the gimme religions to grow up ... or at least cast wider and more absolving nets. One thing's for sure, I won't be alive to see it.

-- In Brazil, a soccer referee expelled a player last weekend, then got into an argument with him, and fatally stabbed him. After the stabbing, a horde of angry fans stormed the field, stoned the referee to death, 'eviscerated' him, decapitated him and put his head on a stick on the field. A grisly reconstruction of the body seems to confirm most of the facts. I cannot find any photo of a head on a stick, which seems odd in an Internet era.

-- A man or woman who keeps secrets from you does not have your best interests at heart ... and that includes the secretive soul in the bathroom mirror.
Posted by genkaku at 9:19 AM