things come apart at the seams

Listen, you little wiseacre: I'm smart, you're dumb; I'm big, you're little; I'm right, you're wrong, and there's nothing you can do about it.

Was there ever a better summing up of parental annoyance than these lines delivered by bone-head father Harry Wormwood (Danny DeVito) in the whimsical-yet-pointed movie, "Matilda?" And what person has not played a similarly-insistent parent to his or her sometimes fractious inner child?

Personally or in social settings ... the decision has been made -- no if's, and's or but's! Without a steadied course, a determined course, a decided course, a principled and abiding course ... well, things would come apart at the seams, wouldn't they?

The only problem is that, like it or lump it, things do come apart at the seams. Which is not the same as saying that the principled and determined agent won't put up a cranky, assured and sometimes cruel fight. The cruelty is often adorned with the trappings of kindness and reason and law.

-- In Russia, Nadezhda Tolokonnikova, a member of "Pussy Riot," has been denied a bid for parole. Two members of the "Pussy Riot" band were jailed after an anti-authoritarian performance in a Russian cathedral in February 2012. 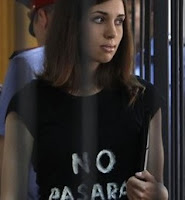 In denying her bid for parole, the court said Tolokonnikova had not yet repented of her hooliganism and should remain in her penal colony. "A similar ruling was delivered against Maria Alyokhina on Wednesday." Apparently the protest song against Russian President Vladimir Putin -- together with the worldwide outrage at the imprisonments -- still rankles and demands principled parental redress.

-- In Fort Meade, Md., the defense is scheduled today to give its closing arguments in the case of Pfc. Bradley Manning, a soldier accused on a variety of counts after having stolen and disseminated secret documents. The government/military has refused to provide transcripts of the case -- a refusal which might give the American public a better basis on which to judge whether its freedoms were being infringed. As a result, a stenographer has been placed in the audience to do what other courts do routinely and create public documents. The transcripts are expensive and are seeking public support. Manning, who has been in jail since 2010, is going to be found guilty. The only question is how guilty and with what penalty from the government he offended. We are a nation of parental laws ... laws we need ... but whose laws and to what end?

-- In Russia, another American leaker, Edward Snowden has so far eluded capture by his cranked-off country. Will he make it to a country offering asylum and if so, will he really be safe from the plausible-deniability crowd seeking to mete out punishment? In Germany, President Joachim Gauck, a man with little power but great moral authority, took the trouble to distance himself from Chancellor Angela Merkel, who has indicated to the U.S. she will not give Snowden a refuge. Gauck said plainly that men like Snowden deserve respect for defending freedom.

One of the questions that crosses my mind in the face of these high-profile public matters is this: Why does it always seem to be the kids who stick their necks out? Of course it's not always the kids (Daniel Ellsberg and Marine Corps General Smedley Butler come to mind), but somehow it seems to be the kids (whether within or without) who drag the smooth and soothing and demanding elders into a revised kingdom. And I guess I have to admit that at my age, almost anyone looks like a "kid." Nonetheless my mind still asks ... why is it the kids who must be shot down, literally or figuratively, in an attempt to get their elders -- who may have fought long and hard to shape their principles -- to loosen the reins? Is there some reason that honestly adult adults might not do that of their own accord?

Wouldn't this fact be worthy of investigation and perhaps revised applications? Since nothing -- from the holiest of spiritual encouragements to the most vile of heinous acts -- is immune, wouldn't this suggest some consideration? Since, moment after moment, everyone steps into a 'future' that cannot be known (steps off an inevitable cliff even as they insist on some solid and well-groomed ground) ... isn't loosening the reins a bit more realistic and, who knows, perhaps more peaceful?

I don't think it has to be a noisy revolution, but I guess I do think that some revolution, some sedition, is necessary.

Things come apart at the seams.