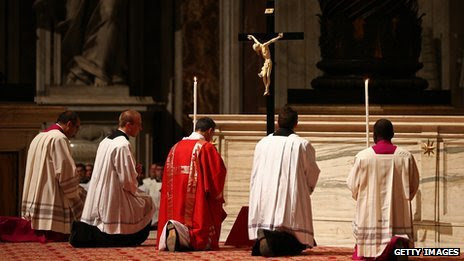 In the first request of its sort, the United Nations Committee on the Rights of the Child has asked the Vatican for thousands of documents related to priest sexual abuse of children:

The Geneva-based UNCRC, which governs the convention, sent a "list of issues" to the Vatican in view of obtaining "detailed information on all cases of child sexual abuse committed by members of the clergy, brothers and nuns or brought to the attention of the Holy See".
The information relates to all cases between November 1995 and January 2014, the UN said.
The questionnaire seeks to establish whether "perpetrators of sexual crimes" were allowed to remain in contact with children and what legal action was taken against them.

As in the past, the hope that the Vatican might make a clean and unequivocal breast of the systemic horrors that have haunted the church at least as far back as the 7th century rises up ....

With, as usual, a bolt hole provided:


But observers say that although the Convention on the Rights of the Child is legally-binding, the Vatican may be able to refuse this request from the committee.

Those who care about this long-running institutional travesty know enough to have seen opportunities rise up in the past only to disappear into a well-constructed fog of inaction and well-camouflaged self-preservation.

No need to imagine this instance will be much different. It is enough that the U.N. should shoulder and make the request.
Posted by genkaku at 10:00 AM