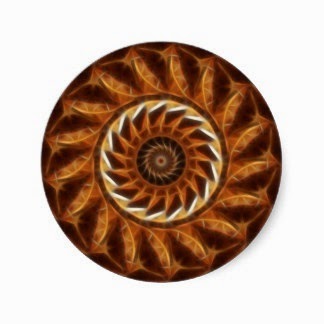 Like a kaleidoscope, the last 24 hours have seemed in their way to be fractured-perfect. How or why, I haven't got a clue and suspect that any clues I or anyone else might apply would be more self-serving than accurate. The "last 24 hours?" Fiddlesticks! For all that ... fractured-perfect.

It all began, if it began at all, yesterday.

-- At midmorning, my son brought me the phone. "It's some woman about Black Moon Zendo," he said as he handed me the phone.

"Black Moon Zendo," a thing of the past, a thing I had built, a thing I had taken seriously, a thing now dissolved. Inwardly, I sighed ... everyone pays the price or reaps the glory from a past that no longer holds sway but once did. As I put the phone to my ear, I suspected there might be some diffident, sincere, outreaching conversation about Buddhism and practice and, below the surface, some relief for someone wanting relief.

I was relieved to hear that it was only the incense company from which I had bought incense in the past. Good incense. The company has a habit of checking in periodically (but not insistently) to make sure this customer was sufficiently stocked and, coincidentally, add to its bottom line with a renewed order. I had always been pleased with Shoyeido, but that time was in the past. I seldom burn incense any longer after years of lighting it, bowing, enjoying.

"So you want me to take you off our list?" the polite young woman asked.
"Yes," I said. "That would probably be best. But I would like to thank you for the past. Shoyeido did a good job."

And just like that, just like incense, Shoyeido receded further into the past and yet left a redolence on the recollecting air ... a scent that was invisible and gentle and yet adamantine in its inescapability.

-- With the phone in hand, I placed a call to a longtime friend who, out of the blue, had send me a pretty substantial check whose subject line read "for work received." The check was dated Dec. 30. When he came on the phone, I said my sincere, if joshing, thanks: Had he lost his mind along with his diminishing muscle tone?

"Well," he said disingenuously, "there was all that work you did 40 years ago." He has enough money so that the check probably did not represent a big sacrifice from where he sat. But to me, on a fixed income, it was a surprising and helpful wow.

Forty years ago, we had worked time and again on a house he has in the hills near here. A real colonial farmhouse that was rich and beloved in its own 1800's past. My friend had mended the house and improved it with a gentleness that spoke to his love of antiques (his business) and the spirit that infuses them. These days, he is both angry and saddened by the phony-baloney antiques purveyors who can talk up their own expertise and make the most possible money ... and love nothing ... not to mention being blowhards by way of expertise. The "Antiques Roadshow" kind of stuff. Money? Sure. But money alone? It was/is a travesty from his point of view.

Anyway, we had worked on the house and barn, gotten filthy and cleaned up, been exhausted by one exercise or another ... and felt great as things moved along. Two days ago, the check arrived and he said it was for the work for which no dollar amount was necessary or even, really, equivalent. Sweating, swearing, shaping and drinking a beer at the end of the day ... it was friendship in the making, though how that worked was not open to discussion.

-- But the check was the check and it was of an amount sufficient to pay off the mortgage on the house I live in -- a gouging monthly bill that wreaks havoc on a fixed income. So I went to the bank and jumped through the hoops that allowed me to pay it off and thus bring a little less stress to the monthly outlays. The house was priced at something like $103,000 when I signed on. Yesterday's payoff represented a cumulative bill (over 25 of so years) of something like a half a million dollars. I shoulda been a banker, but my past didn't work that way.

After the paperwork, the bank exec and I chatted. She, like Shoyeido, had a bit of past to remind me of, a past I hardly thought much about.

"I always read your (newspaper) column," she said of my increasingly-reluctant monthly efforts in the local paper. "They always make me feel good. I don't know if that's your intention, but that's what happens."

It was a nice compliment, of course, and I said the socially-respectable thank-you, but the truth was I didn't know if that was my intention at all. Once out the door, columns, like incense, go into some overstuffed closet in my mind -- a place where the past is consigned, the door closed and ... well, that's that; no need to pull it out and go through it as if it were still as compelling as it once was. And yet, there it is ... lingering, lingering, lingering and to pretend I am truly shut of it is both stupid and lazy. Good deeds and bad amount to about the same thing ... an overstuffed closet that is inescapably part of the house.

Anyway, the mortgage got paid off and I bought some flowers and champagne for my wife and, for a little while, both of us smiled at our good fortune ... good fortune that rose up out of the past and lingered in the present ... all that effort, all the memories that dangled on the Christmas tree called a house. Was it the past or was it the present expressing itself? Anyone who claims to answer that question is a bald-faced liar. Kaleidoscopes are things to enjoy.

-- Overnight, I dreamed and then found my dreams slipping without effort into the wakefulness that followed. They were just dreams, but I generally don't remember them and, when I do, it takes me back to the shrink who once helped to realign my pretty-rigid and shuddering lifestyle. "Remember your dreams and write them down" had been his only instruction as if knowing that 'intelligent' people can talk up a storm and explain anything, but dreams don't accede to such socially-acceptable blandishments. The question always comes along, "If you're so fucking smart, how come you're not happy?"

I remembered my dreams for my shrink and he made suggestions that I
was free to ingest and digest or not. It could be pretty intense ... an intensity that hardly remains these days, but some of the skills or approaches remain. Last night, I dreamed.

At first it was a subway platform with a modest crowd waiting. Subways and basements were always my tip-off to what's happening below the surface and behind the scenes ... a no bullshit arena. Anyway, I waited and grew restive about the delay with everyone else. Finally, a sooty utility train (the guys who fix stuff) emerged from one tunnel, slid slowly though my station, and exited further down the track. It had been the hold-up of the passenger train that followed shortly behind it. I got on.

A saucy little Japanese boy was cutting up along the bench next to me. He looked me in the eye and grinned. He wasn't raising hell, but looked like a hell-raiser who could laugh. We kept eye contact as he postured ... we smiled ... we knew each other, but lacked a common language. I gave him a small glass of beer. A man appeared and took umbrage at my gift. I offered him the beer to taste and thus judge how naughty I had actually been. He said nothing about the beer, but introduced me to the boy's father, a young Japanese man who told me in fractured English that his wife had died two years ago. I said I was sorry and suddenly I was overcome with grief. I reached out to touch him. He moved very close in, accepting my touch. His face came closer and closer to mine and suddenly I knew he wanted a kiss. My social mind said something about not kissing men on the lips, but then I knew that that was bullshit and I kissed him gently and gathered him in and wept.

Like all dreams, you had to be there: The factual fractured bits and pieces cannot convey the feeling and understanding and love and sorrow that infuse a dream. It was powerful ... sort of. It was perfectly ordinary... sort of. But whatever it was, it seemed to come with me, faithful as a tail-wagging hound....

I opened my eyes to the still-almost-full moon out the window. It was bright. The idea that I might distinguish between appreciations when asleep and appreciations when awake ... well, it struck me as mildly dumb -- sort of like looking back on a love of cap pistols or dolls -- and entirely unnecessary except when conversation lagged over the dinner table or in a gossip gathering.

Awake, asleep ... same stuff. Just twist the kaleidoscope a little and you'll see what I mean.
Posted by genkaku at 7:35 AM