keys to the kingdom 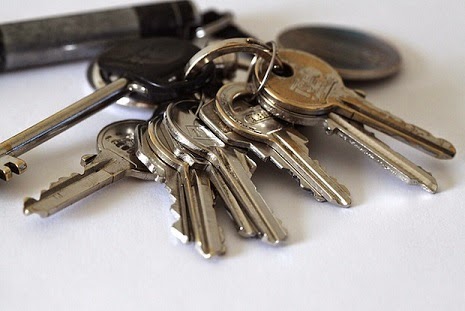 In the process of gathering information for a puff piece on home break-ins, I once asked a police captain how he personally protected his house when he wasn't around in the evening.

Strange to think how anyone might assume that locking a door would protect and preserve when the fragility of windows is as plain as the nose on your face. True, it might slow things down, but not by much.

How reassuring the keys to life can seem. A religion, a philosophy, a belief -- they all have a reassuring and tentative protection and nourishment. The good stuff is defended and fertilized. The bad stuff is kept knowingly at bay, if not exactly vanquished.

The problem is, of course, that keys that provide a keep-out protection also imply an opening and ingress. The doors may be well and truly locked, but the windows remain. The keys to heaven are invariably the keys to hell as well.

I do not think anyone should go into a depressing funk about any of this, sit stock still as a means of falling into neither the trap of heaven nor the trap of hell. I just think it is worth noticing as a means of assessing the usefulness and perhaps truth of the keys anyone might choose.

Keep it locked up safe.

Unlock it when the coast is clear and the need arises.

No one's getting my flat-screen TV! No one's gonna disturb my equanimity!

But the walls that keep out likewise hem in. Wasn't it outside the protective wall of his well-appointed palace that the Buddha encountered what was fruitful in his life? I don't know, but I choose to see it that way.

But nor yet was unlocking the palace gate exactly complete, whether literally or metaphorically. The man or woman who unlocks is the same man or woman who locks. Safety and protection, danger and vulnerability are a package deal.

So where is the key to this conundrum ... the perfect safety and bliss? When all the perfect keys work imperfectly, is there a perfection of some sort, some "enlightenment" or "Nirvana" or "heaven" in which life is nothing but a bowl of Twinkies? Where's the key?

As I get older, the literal keys that I have become fewer and fewer. My control and assurance wanes with them. My ideas about safety and protection lose their savor. It's spooky and lonely on occasion, but it also has a strange correctness to it.

Turn on a couple of lights, leave your radio on and the front door unlocked ... and enjoy your night on the town.
Posted by genkaku at 7:50 AM