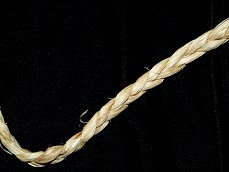 It was in the late 1960's or early 1970's that I first read books by John Blofeld, a man who wrote a number of books about Buddhism and other Asian religious thought. At the time, I was fresh as a daisy to Buddhism and ingested books with the desperation of a student trying to catch up with other students in a class I barely understood.

Something in one of his books made me send him a letter. Couched, no doubt, in admiration for his work (I might not know Buddhism, but I knew writers), I was secretly hoping I might hear from him in return ... but fairly sure I never would: What does a man of accomplishment care for a nobody of no accomplishment?

To my surprise, he wrote back. It was before the Internet, in the time of typewriters and handwriting. And so began a number of years in which I grew less shy about asking my novice questions. He never criticized or played lord of the manor, but he was not above poking and goading my adoration. He was also honest. "I don't like so-and-so," he wrote more or less of one Buddhist writer. "He's too cold." The statement struck me as very daring: This was a time as well when if something were written in a book it was true with a truth beyond mortals such as me.

With time, the correspondence dwindled ... perhaps after he died in Thailand in 1987. Somewhere around this over-stuffed house, the letters are saved as if to preserve the wonder that they brought to my life at that time ... much as I saved the letters of a Zen monk who did me the same epistolary kindness.

I thought of John today when I got an email from a woman who used to read this blog and with whom I have had occasional personal correspondence. She wrote to say she read my blog every day (flattering that it should be read at all), but that it occurred to her that such a daily ritual was really an attachment which she intended to put a stop to: No more reading the blog. I wrote back to say I thought it was an excellent idea and wish her well in her travels.

Her note made me think of Blofeld and of whatever my Buddhist 'lineage' might be. Surely it's not monastic and yet I was interested to think that this is the way lineage may really work ... someone purportedly better versed lending an ear to the one less versed or uncertain. John and I parted ways and the email writer and I now seem to have parted ways and yet "parting ways" is an overstatement and largely an untruth. The connection, though no longer connected, is, in fact, connected. Not in any oooooeeeeeoooo sense, just in truthful, common-sensical fact.

It's pretty straightforward and hardly requires the official seal of any organization or religion. I choose my lineage, you choose yours and maybe we can lend each other a hand ... even if we never meet. It's as if there were no strands, only a rope that balks and bucks when the oily word "connected" is supplied.
Posted by genkaku at 2:59 PM