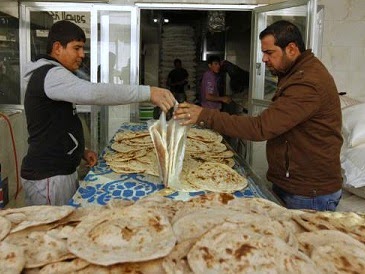 The 'terrorist' Islamic State may be in trouble that is deeper than the western military efforts aimed in its direction:


Islamic State has not only lost some territory but, preoccupied by its military effort, it has been unable to provide [Iraqi] farmers with seeds, fertilizer and fuel at subsidized rates, as the government does.

As a result, the wheat crop is seriously endangered and the Iraqi population may go hungry.

The dictatorial "caliphate" comforts retailed by Islamic State are in deep trouble if it cannot feed its adoring throng. Righteousness loses its savor when contending with an empty stomach.

Kalashnikovs and American drones may be persuasive and kool, but an empty stomach has other tales to tell. Perhaps the United States could learn a thing or two from Islamic State when it comes to depending on a well-fertilized fear to rule with righteousness.
Posted by genkaku at 7:48 AM