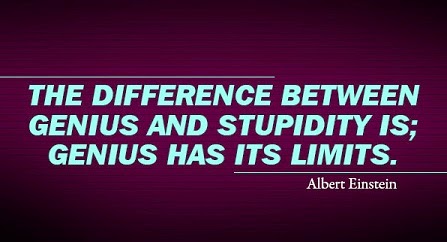 Like the word "hero," "genius" doesn't mean much in a vacuum. The "genius" is smarter than you and me, but how does the alleged "genius" feel about it?

Wouldn't the "genius," like the "hero," be in the best position to assess the mantle placed around his or her shoulders by others? Perhaps so, but whether those applying the word would listen to such assessments and act according to them is very much in doubt ... in fact, those applying the words can be downright deaf and intransigent about having their own, 'spot-on' way.

Here in America, the vein of anti-intellectual sentiment is nevertheless balanced by a delicious awe at some intellectual achievements. The occasional social ineptness of genius can be a matter of ridicule: "He's so smart that he couldn't find his own ass with both hands." And those straining at stool to be known as "a genius," the wannabes, can receive even more opprobrium. But the same testy critics can applaud wildly when a space probe lands on a comet... pure genius!

But what do those who attract the word "genius" have to say? And what reason would they have to lie?

In a BBC article entitled "Six Lessons We Can Learn from Geniuses," the lessons are not-so-surprisingly common-sensical: Be willing to work; think outside the obvious; be willing to be wrong; follow the evidence rather than the group agreement; don't expect that your answer will be the answer; accolades are nice but not the point; etc. In other words, think.

The fact that one person can think better than another is hardly more surprising than the fact that some people can run the mile in under four minutes. Some can, some can't. Setting aside the viciousness of academic competition, there is no 'becoming' a genius ... you practice, you do what you do, sometimes to effect, sometimes not. When/if anyone calls you a genius, it better not be you -- that would be pure ignorance. But when presidents gather round to designate "heroes" and lesser minds rise to their feet to applaud the "genius" ... well, how true does it really ring? Others may only imagine the genius or hero is being diffident when s/he disclaims the label, but it must be pretty confusing to be lauded for what you could not escape in the first place.

Or, as Sheila Nirenberg of Cornell University put it:


It’s a funny word: the word ‘genius’ .... I just sort of ignore it and just go on with life. You just do what you do independent of whatever label’s attached to you. I don’t know really how else to explain it.

Einstein, Gandhi, Buddha, the Dalai Lama, the combat vet, the mother watching her offspring at the playground or the mechanic at the local Sunoco station ...

Pure genius and a couple of bucks will get you a bus ride.

Claiming genius, whether within or without, does not.
Posted by genkaku at 8:26 AM