A friend of a certain age and with, I imagine, some of the same propensities as I have at my age, sent along the following adviso: 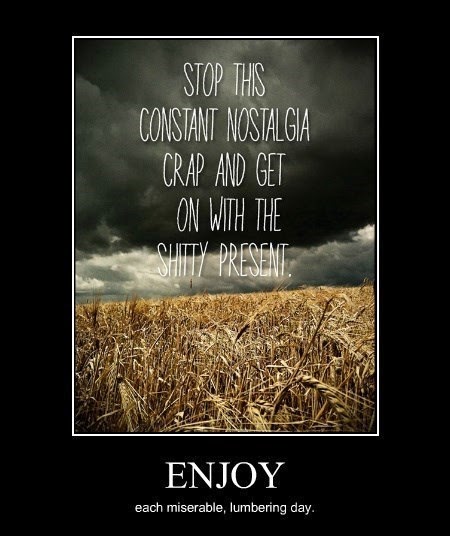 Those who are old enough will recognize the sense of grumpiness that arises with a dwindling sense of social connection and usefulness that age provides.

With age, each reflection and pronouncement seems to be invested not so much with an eye to the future and its possibilities, but with a past and its teachings. It's as if you had become your father's saying, "I remember when hamburger was five cents a pound." Simultaneously, there is a great deal of sympathy for a younger crowd who hear such pronouncements while their eyes fill up with a skepticism that reads, "Who the fuck cares?! The past and a couple of bucks will get you a bus ride!"

[I realize that there are those youthful souls who are more mealy-mouthed and sycophantic and who will be at great pains to praise the "wisdom" of old timers. But the impact is largely the same, though somewhat more polite: The past is the past; there's no real learning from it until anyone chooses to experience that learning ... all over again, from an elderly point of view.]

But those of a certain age, as the poster indicates, can be increasingly saddened to have lost or be in the process of losing the sense of the future with its plans and helpfulness and acquisition and joy. Each day has a "miserable" cast because, well, been there and done that and, like my father, I have my own versions of "hamburger at five cents a pound."

Like some quiet, painless leech, the past and its apparent nostalgia rises up among the elderly and sucks the blood from the bushy-tailed involvements of youth and a social connection in which others are likewise convinced by the future. It's lonely.

Well, today all this occurred to me in a somewhat different light.

Those of a certain age may do their damnedest to remain socially relevant and connected and hopeful and in the flow that leads to the future and its imagined improvements, but it doesn't work very well. "Hamburger" -- and other bits of nostalgia -- simply seems more relevant based on experience. Like some soft, insistent vortex, it sucks you in. As muscle mass dwindles, so too does the willingness to imagine you could know an unknowable future ... however popular the activity.

But is there anything more tentative and occasionally idiotic about getting sucked into the past than there is about getting sucked into the future? Both are inexact and, when you get down to it, unknowable -- edited to suit the tastes of those who cannot escape the present they dwell in. Whether "miserable" or "delightful," it's just the name of the game rather than the name of the actual and factual.

Don't get me wrong: I'm as much a fan of a good story and the social contact it can provide as the next fellow. The growly assholes who say with a straight face that "we have to dwell in the present" are just busy trying to ward off a well-imagined future that is, in the end, unimaginable. But there's nothing wrong with a good story, so long as it is recognized as just that -- a story.

All of us are sitting around the camp fire swapping tall and sometimes enjoyable tales beneath a starlit sky.

Did I ever tell you that there was a time in my life when gasoline was twenty-five cents per gallon or that I had a sometimes unhappy upbringing?

Your turn: Tell me about your efforts to lead a "more compassionate" or "improved" or "intelligent" life.