write about what you know 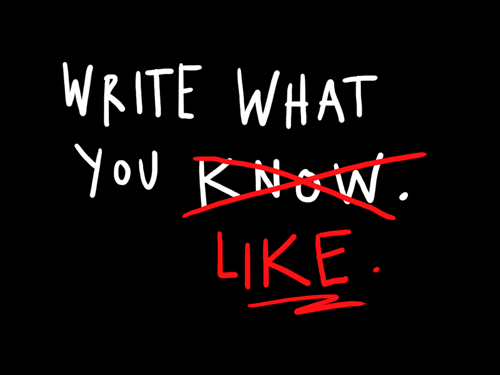 When I was in my teen-aged years, I once whined to my mother in a context I can't really remember, "But I don't know what to write about!" She, as a published author, was unfazed: "Write about what you know," she said without breaking a sweat.

As a teenager, I heard this advice, which would be repeated by others as I grew older, as both uncaring and infuriating: What the fuck did that mean?! How did that advance my cause?!

But then I thought about it and the conclusion I reached was that I didn't really know much about anything I wanted to write. I knew I wanted to be applauded or agreed with as a result of writing, but what did I actually know?

I knew, for example, that I was at the time a virgin, but what red-blooded blossoming male wants to admit that, let alone write about it? Or, I knew that the hypocrisy of adults made me angry, but in order to write about that, I would have to examine the panorama of what created that hypocrisy and investigation did not appeal much: It was so much easier to hurl the "hypocrite" label and relax in my righteous, but largely unexamined, easy chair.

Write about what you know.

But if what you don't know weights the imbalanced scales, how could anyone write about what they knew? You could play the mild-mannered and humble writer who couched every statement in a "maybe," but that was not much fun and took the juice out of writing. Diffidence has its limits and there is a voice within that growls impatiently, "Spit it out, for Christ's sake!" The academic's insistence on subjunctive modifiers is ... well, line 'em up and shoot 'em all ... it's too damned exhausting for words!

This of course takes the wannabe writer back to the basis on which he or she wants to write. How many essays has anyone read in which the writer is clearly trying to please or convert someone else, in which every noun and verb is carefully chosen with an eye towards raising the writer's stock in someone else's eye? It can be artful, but it is cloying and gutless and insincere. That ain't writing.

Write about what you know? What does that mean?

Well, I guess it means to write about what I know and what I don't know and not fuss too much about the distinction. It's just writing, for heaven's sake.

I might, for example, write about the fact that I am no longer a virgin, but that strikes me as incredibly banal in view of the population growth around the world.

How about anchovies? I hate anchovies and could write about that with some gusto ... as if I knew something about it.

I guess writing requires a willingness to be a fool. Foolishness is a topic anyone might recognize as valid and 'knowable' and, on occasion, comforting.
Posted by genkaku at 1:27 PM