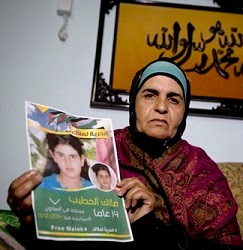 BETIN, West Bank (AP) — The fate of a 14-year-old Palestinian girl, tried before an Israeli military court for hurling rocks at passing cars in the West Bank and sentenced to two months in prison, has gripped Palestinians who say her treatment demonstrates Israel's excessive measures against stone-throwing youth....
The Israeli military said al-Khatib was charged with stone-throwing, attempted stone-throwing and possession of a knife and that under a plea bargain, she was sentenced to two months in prison and a $1,500 fine.