the company of rabbits 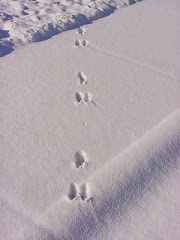 Beneath the still-lit street lamp, would I know it had and continues to snow if the rabbit had not passed by my doorstep, leaving delicate and perfectly-etched tracks?

I suppose I would, but somehow the tracks are more confirming than the flakes falling like miniature baffles from the sky ... so, so silent. Strange to be convinced that those flakes create a palpably reinforced silence and yet, were they not falling I would be among the fools willing to describe the world as "silent." Is there a "silent, silenter, silentest?"

The organ recital tunes up the email orchestra this morning:

A friend has had a stroke. Another's wife was correctively diagnosed with starge 4 ovarian cancer while he has taken medical leave from his teaching position in order to address an upcoming hip replacement that will replace the cane he is now forced to use.

I woke up wondering if I would remember to forget, a habit that seems to like playing hide-and-seek ... a delighted child ... appearing when not expected, absent when tended to. I have forgotten whether I forgot. No doubt it will play peek-a-boo in its time.

My younger son goes to the gym to exercise his healthy body. No one in good health would willingly care much about sickness or waning capacity ... hell, even I find it boring. He cares about my condition, but is not sure what to do, exactly: There is connection and love, but what the hell can anyone do? A good lesson, perhaps, but sitting in a classroom day-in-and-day-out ... fuck that! It's pretty irritating, together with being boring. It's wearing without bearing any of the fruit that a passing rabbit might leave on the sidewalk.

Thank god for the company of rabbits.
Posted by genkaku at 6:45 AM