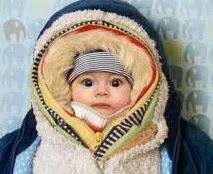 It is cold this morning -- minus two degrees Fahrenheit at the moment. The dawn sky was dotted earlier with pink clouds as if to bring credibility to the old saw, "Red sky in the morning/ Sailors take warning./ Red sky at night/ Sailors delight." The forecast promises a few inches of snow later today.

Bundle up as I have. Wrap yourself in layers of clothing...

Swaddle yourself in another and another bit of clothing.