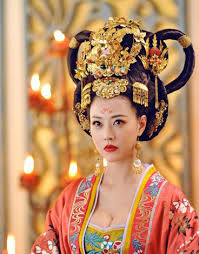 BEIJING (AP) — At the end of December, a popular television series chronicling 's most famous empress suddenly went on a four-day hiatus. When it returned on New Year's Day, the low-cut necklines and squeezed bosoms had vanished....
No one has claimed responsibility for the awkward cropping, but it is widely believed to be the work of the country's prudish censors.

I am as much a fan of decolletage and other displays of the come-hither female chest as the next horndog, but in honesty my old fart is somewhat in sympathy with the ill-advised Chinese hierarchy, though not for the same reasons.

What the current boobs-on-parade cultural penchant reminds me of most is the second-rate comedian who gets on stage and peppers his (it's almost always a 'his') monologue with the apparently-daredevil use of the word "fuck." If he says "fuck" often enough, maybe the audience won't notice his lack of humorous material. A cheap date if ever there was one.

And likewise if a movie or TV female presence shows enough cleavage, maybe the audience won't notice what a self-centered airhead she or her character is or what a lackluster plot is on display.

When push comes to shove, it seems to me that sex-appeal is dependent not so much on what is shown, but rather on what is not shown or is quietly suggested as it rouses up a vivid imagination. In early America, for example, it was once considered risque for a woman to display an ankle. An ankle?! Who ever went bonkers over an ankle? But of course all you have to do is say something is forbidden to have it invite on a gimlet-eyed focus. 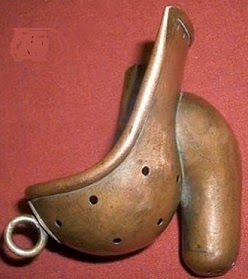 I wonder: If women were in charge in China or anywhere else, would there be a faction hellbent for leather on banning the cod piece?

Don't think of a purple cow!

It's all sort of like spiritual precepts, I think ... inviting, twinkling, seducing, and elevating the ordinary to the extraordinary. A censorious world in which babies come from storks has a certain -- what shall I call it? -- sex appeal, maybe.