a nudge from Mel Brooks 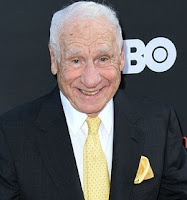 Part of a Q-and-A with comedy film director Mel Brooks, 91 ... a nudge of sorts:

AP:  What sort of impact do you think you’ve had on American comedy?

BROOKS: One never really sees themselves in relationship to the wide world. It’s rather impossible to judge your impact on moviegoers, your impact on people who like your films or who like your television. It’s serious. When they tell me, I’m glad to hear it, but frankly I’ve got to tell you honestly, I walk past the mirror and I say that’s a cute old guy. I don’t think it’s me! I’m not a cute old guy. I’m still 35, you know? We really can’t see ourselves and judge ourselves in relation to other people. (emphasis added)
Posted by genkaku at 11:25 AM