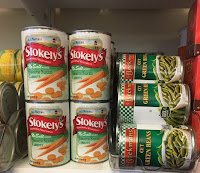 Go to college. Increase your poverty. Go hungry. But remember that as long as someone is making the money, your ignorance and distress are entirely acceptable to those who often tout a college education. Or maybe my too-facile mind is filled once more with tommyrot.


SCHENECTADY, N.Y. (AP) — Free food pantries are becoming nearly as common as the campus book store at a growing number of colleges.
More than 570 campus food pantries nationwide are registered with the College and University Food Bank Alliance, which formed in 2012 and helps colleges set up food pantries and other hunger programs. New York recently required that they be established at all institutions in its state university system....
A report published this month by a lab at the University of Wisconsin found 36 percent of 43,000 students attending two- and four-year colleges who were surveyed in 20 states had trouble getting enough to eat, threatening the academic success that’s key to overcoming poverty.

Out of one side of their do-good mouths, a college education is a treasure beyond measure. But out the other side it is a treasure left in the shade by the student-debt trove that stands, I believe, at something like $1.3 TRILLION. Someone holds that debt and makes a good living from it ... though not those who have been horn-swoggled into a "college education." Donald Trump is the perfect president for a land in which ignorance assures comfort and income and a lack of shame.
Posted by genkaku at 6:05 AM