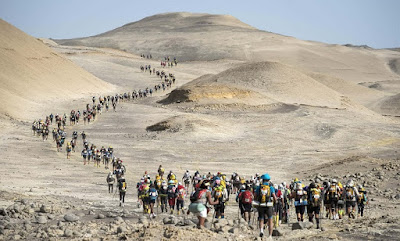 They are an almost-impossible test of the human body and spirit, yet the number of ultramarathons has increased 1,000% over the last decade. Adharanand Finn asks what’s behind this rapid increase – and whether racing 100 miles or more is actually good for you....
But are ultramarathon runners doing it to be healthy? No one I spoke to cited that as the reason. Hoffman followed up his research with a fascinating question posed to another 1,394 ultrarunners: “If you were to learn, with absolute certainty, that ultramarathon running is bad for your health, would you stop?” Seventy-four per cent of runners responded: “no”. -- [The Guardian]

Reminds me a bit of a Zen Buddhist chum who was skeptical, in the meditation practice, of what he called the "samadhi junkies."
Posted by genkaku at 6:23 PM