the wicked warriors of language 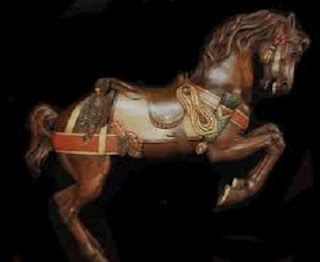 It must be a hundred years since I last used the word "cantle" and yet there is was this morning as I woke up -- free-standing, without associative references, a single chunk of in-your-face rock ... sort of like Stonehenge minus the other rocks.  "Cantle."

Since I am not a horse-y person, the likelihood that I might employ the word -- which is defined as the rear portion of a saddle ... at the other end of a front called the "pommel" -- dwindles. Lately, I guess, I miss even the useless things that dwindle. "Cantle" is just a small enrichment of language that is hardly diminished by its absence. And yet, I guess, I miss it. A place to rest or brace your ass.

I suppose there will be people who use the word without a backward glance, but "cantle" for me seems an enrichment of sorts ... not a big deal and yet a small brick in the hundreds of other linguistic bricks. Something to liven up the stew. Sometimes these days, language seems to be a deflated commodity ... the ugly sister cowering in some corner.

What ever happened to the spirit of  William F. Buckley, Jr., the man who founded the conservative magazine National Review and was given to using without apology or explanation words that many of us had never heard. His languid, well-educated, unapologetic, patrician arrogance was generally infuriating to liberals like me and yet ... well shit! he was fun. Where are the people these days who can be quoted as saying such things as extracted by Wikipedia, whose parameters I imagine Buckley might have excoriated:

-- Liberals claim to want to give a hearing to other views, but then are shocked and offended to discover that there are other views.
-- The best defense against usurpatory government is an assertive citizenry.
-- I won't insult your intelligence by suggesting that you really believe what you just said.

The man was as smooth and agile as liquid mercury on a Formica-topped table. Are there any left like him? Sure, there are guys who can used long words because they're too stupid to do anything else. But I mean people who assume the throne and D-double-dare-you to try to dislodge them?

Not that I would put "cantle" into that realm. "Cantle" is just a flake of mild pepper in a world of Wonder Bread flatulence. And I am reduced, in a diminishing time, to relying on the words of others -- a sure sign of a reduced capacity to giggle and weave.
Posted by genkaku at 8:36 AM