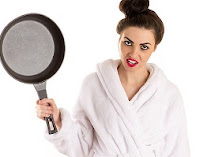 In general, men are stronger than women, based on muscle mass. There is nothing biased about it unless someone wants to rail at Mother Nature.

And yet in "domestic disturbances" police officers are sometimes forced to sort out, the person arrested, if any, is more likely (a broad-brush guess) to be the man.

This disparity was brought to my attention this morning by my younger son's close friend/wife-wannabe who is a nurse who works the graveyard shift at a local jail. This morning, when she came home from work, she told me she had examined a fellow who was somehow injured and under arrest. Referring to the injury, the nurse asked the guards where the woman (and wound-inflicter?) was being held. Well, she hadn't been arrested, the guards said, though the wound suggested someone had inflicted it.

And it makes you wonder why, if so, women are not likewise arrested in domestic disturbances. Surely some of them, however few, must have a capacity and willingness to swing a frying pan. But perhaps it is the assumption that if a fight is in progress, the man is the guilty party.

Just something to wonder about.
Posted by genkaku at 1:45 PM