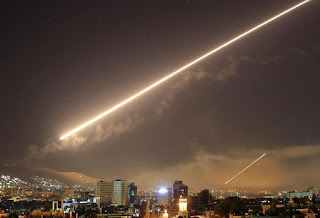 Today, the news wires are chock-ablock with reports that the U.S. and allies had loosed some 103 missiles at Syrian locations where chemical weapons were manufactured.

No one, as far as I can figure out, was killed. Pretty spiffy shooting -- no(???) collateral damage -- until you run across the fact that Russia gave Syria a heads-up two days before the attack: The facilities had been evacuated and, presumably, the chemical-weapons masterminds were free to continue their work elsewhere. And who, I wonder, gave Russia the heads-up forewarning? Is it wise to let your target know that he/she/it is the target? Doesn't that eviscerate the meaning of "target?"

Anyway, no Russians or Syrians were killed, it seems. The U.S. -- or anyway its president -- is thinking of pulling out of Syria (where Russia would like to remain both for oil and warm-water ports) and any Russian deaths would probably make departure less likely if Russians got a case of let's-retaliate. That desire is probably damped by Putin's political unwillingness to have Russian military bodies stacked up (publicly reported) outside his door. He currently sidesteps that problem by sending anonymous mercenaries instead.


...[R]egional and global powers now exploit Syria for their own advantage and apportion out its territory for repeated bombing. At this point, the country has been bombed by the Assad regime, the United States, Britain, France, Russia, Iran, Turkey, Israel, Saudi Arabia, Jordan, Bahrain, and the UAE.
Rather than limiting war, this latest bombing of Syria normalizes the war’s ongoing brutality. Forget the chemical weapons for a moment. The bombing of Syria by the western powers essentially and unconscionably establishes near total warfare on civilians as an acceptable “international norm.” Our politicians will wallow in their most recent action, calling the bombing a great success for our civilization. In fact, it’s much more akin to our demise.