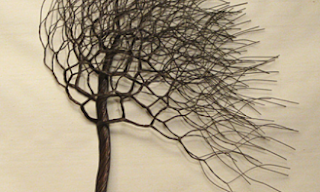 Breanna, my younger son's lady friend, bounced into the kitchen earlier this evening.

"Where have you guys been?" I asked idly.

"We were at the gym," she replied.

Her face filled with a kind of incredulous surprise. "Say that again," she said almost breathlessly.

"You look fit as a fiddle to me," I reprized.

She ran through the back door and informed my younger son who was standing in the driveway of what I had just said -- a phrase she had heard for the first time earlier in the day. She had never heard it before: "Fit as a fiddle." Now she had heard it twice in a couple of hours. Pretty magical, I guess.

Does anyone else feel that if they had simply listened to the kernels of wisdom accumulated through growing up among friends and relatives, there would have been no real need for expansive adventures into philosophy and religion and sociology? All that study of Sanskrit or Hinduism or phenomenology or logic or a variety of trends ... well, the further I travel, the more I wonder if just sticking with what your grandmother told you would have created wide pastures of land on which to plant other, more useful fruit.

"A stitch in time saves nine."
"The way to a man's heart is through his stomach."
"Measure twice, cut once."
"You can't make an omelet without breading eggs."
"When an-eye-for-an-eye becomes the rule, everyone will be blind."
"A bird in the hand is worth two in the bush."
"A chain is only as strong as its weakest link."

And no doubt there are a gazillion others tucked away, huddling and just waiting to be unhitched from the DNA strand to which each is currently attached. Second-nature stuff which covers the bases without a backward glance. If I had just paid better attention when I first consumed them, all that time spent on Hinduism or Buddhism or the Russian Revolution or William James ... well, shiieeeet!

I suppose it's not a perfect fit or a perfect equation, but still, what a lot of time might have been saved if I had paid attention and followed the Yellow Brick Roads already laid out, plain as paper, in front of me.

Better luck next time, Adam.
Posted by genkaku at 7:45 PM