Distant relatives of Frida Kahlo have won a temporary injunction that stops sales of a Barbie doll depicting the late Mexican artist....
Critics say the doll does not reflect Kahlo’s heavy, nearly conjoined eyebrows, and its costume does not accurately portray her elaborate Tehuana-style dresses.
Barbie is an American icon that has often been criticised as promoting an unrealistic body image and consumerist lifestyle. Kahlo was a lifelong communist who died in 1954. 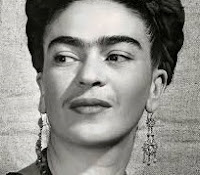 Frida Kahlo as Barbie?????!!!!! What made Mattel think it could co-opt this tough and/or fragile woman? Barbie is bull. Kahlo is not.

It's enough to make your teeth itch, though I suppose if you can put 'Jesus' on a dashboard, turning Kahlo into a simpering role model is not that unusual. Still, it fries my grits.
Posted by genkaku at 10:23 AM