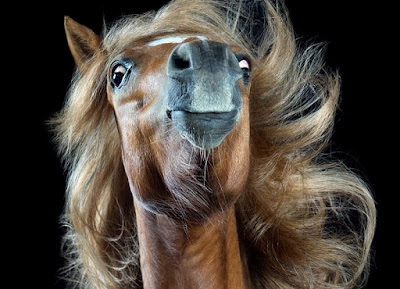 Perhaps the above example of an exhibit of mane-shaking horse photos best depicts my whirligig state of mind this morning. A state I am utterly unwilling to take responsibility for ... it's a mess. Nuff said.

Somehow, I got sucked into reading about Vladimir Putin's use of proxy/mercenary troops in Syria. By using mercenaries, he does not have to report those who have been killed ... which might dent his political popularity. There was, for example, the tale of a former Russian cop who could not feed his wife and son well and so joined the mercenaries ... and was paid 12 times what he could make as a civilian ... and was killed, but not hailed. And then there was the exhaustive and exhausting Reuters investigation of mysterious flights out of Russia and into Syria (and vice versa) ... middle-of-the-night flights composed of men with camouflage gear who were listed on no manifest, were disinclined to identify either themselves or their mission, boarding 20-year-old American civilian aircraft that had artfully been transferred .... and there's more and more and more weird shit.

So, Russia has its mercenaries.

As I believe the Americans do too.

Blackwater Security, now soothingly renamed Academi by its private investors, continues to dangle bait in the water -- the kind of bait that may have helped inspire the Washington Post to lead a 2007 article with, "It costs the U.S. government a lot more to hire contract employees as security guards in Iraq than to use American troops." That lead fails to nod to the political price Vladimir Putin might prefer to sidestep -- the political price of Americans in body bags. Heaven forfend that Americans should die or be grievously wounded in a shooting war.

Further and further down the rabbithole I slid this morning. And that has prompted me to post what I consider largely "fake news" -- the idea that eventually mercenaries will be fighting mercenaries and there will be no war, no blood, no deaths, no price, no tears. Drones and mercenaries will allow everyone to lay claim to plausible deniability.....

But I can't prove it and lack the energy to do much more than shake my mane in utter overwhelmed-dom. It's all real and it's all bloody but the precise nature of "it" is somehow missing. Putin wants his access to the Mediterranean and a slice of the oil pie. America wants its access to oil and strategic bases in the event of a more full-frontal war.

I haven't got the energy or the smarts. I hope someone else does, but I am not holding my breath.

I do notice, faut de mieux, that the sun is shining and the sky is blue. My eyes defend my conclusion. I can't say the same for my political analyses/blather.
Posted by genkaku at 10:56 AM