deference to the most high

Perhaps, in the end, it would be best to honor everything or nothing as the most-revered, the top of the heap, the king among kings, the talisman beyond all talismans, the worthiest among the worthy. 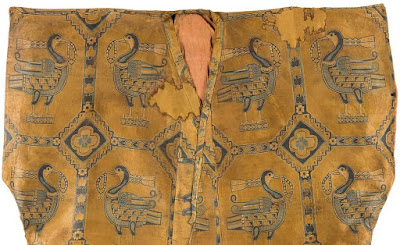 A golden silk shirt woven more than 1,000 years ago, which was among the greatest treasures of the nomadic Sogdian people, is coming up for auction valued at up to £500,000.
The garment features a pattern of ducks wearing fluttering scarves – a sign, with the jewelled necklaces they carry in their beaks, that they belonged to the royal household.

To some, of course, the $100 bill is the very-god among very-gods. To another, it is a bit of paper good for starting a camp fire. To some, the text comes down from on high where it may be regarded by others as mere scribble-scrabble on what passed for paper back then. And the imperial dragon is the cat's pajamas here but a bit of fanciful fancy there.

Who knows who will venerate what when? In parts of the Middle East, you can lose important extremities for failing to show sufficient deference to the Quran.