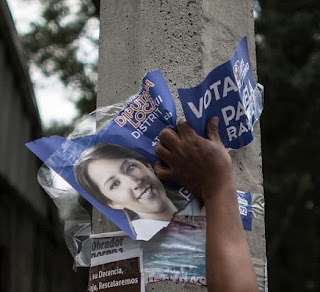 At least one small Mexican community has


... found a simple solution to the vote-buying and patronage which plague Mexican democracy.
The indigenous Purépecha town of Cherán threw out all political parties after a popular uprising in 2011 – and it doesn’t want them back.“The only thing the parties have done is divide us,” said Salvador Ceja, Cherán’s communal lands commissioner. “Not just here – in the entire country.”

This is happening in a country U.S. President Donald Trump wants to wall off. And you can sort of see why... maybe there is an infectious quality to the mindset in Cherán.


Much of that antipathy can be traced back to the situation in the early part of the decade, when the surrounding area was dominated by illegal loggers, who clearcut local forests and hauled out dozens of truckloads of logs each week – with the protection of a local drug cartel, and the collusion of corrupt police and local politicians.
Eventually, the townspeople decided they had enough. Early on 15 April 2011, local residents ran off the loggers and blockaded the town. Then they kicked out the mayor and banished political parties, arguing that infighting was what had allowed the town to fall into crisis.