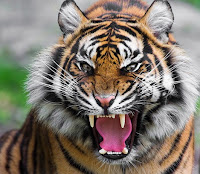 Every now and then, there may be a news report of a man-eating tiger in some rural part of India. Such incidents, which understandably put villagers in fear, seem to have similar characteristics from one to the next. If I recall correctly, the tigers are frequently described as being slowed by age or infirmity and so pick on some slower prey. Also, they attack their prey from the rear, leaping on its back and inflicting what wounds may be necessary to provide a breakfast, lunch or dinner.

A passing brush this morning with the Mumonkan and the Blue Cliff Record, two books of koans and commentary that are part and parcel of the Zen Buddhism I once signed up to follow, put me in mind of the tigers.

Koans are intellectually insoluble riddles aimed at demonstrating the limitations of the smart-as-a-whip intellect. An example: "What is the sound of one hand clapping?" Or, "What did I look like before my parents were born?" By focusing whole-heartedly on the issue, the student is invited to see a wider, clearer world.

At one time, I was dying to be given a koan. I wanted to be more closely aligned with the Zen group to which I belonged at that point. I wanted to be thought fierce and sincere. If a teacher gave me a koan to work on, it might indicate my advance upward through the Zen ranks. Eventually, I was given one and set to work holding it in my mind and butting my head against its impossible, immuring nature. I tried and tried on my meditation cushion. But no matter how hard I tried, I couldn't seem to ingest or care about it. What a chickenshit!

How long did I keep all this up -- this comparing myself to a revered text and its conundrums? I don't know, but eventually something just gave up the 'revered text' perspective. If I didn't give a shit, I didn't give a shit. If I was scared of what I might find out, well, hell, I was just scared. If the wise men who compiled these wondrous texts were wise, well, I couldn't help that or imagine I might match them in some shiny, esoteric wisdom. They were dead and dead people have a tendency not to argue.

My problem, among others, was that I could not bring my heart to bear. What someone else called important simply did not imply anything I considered important... sort of.

The tiger was creeping up in the grass behind me ... careful, lethal ... but for the moment I was held in thrall to the 'right' way of doing things, the Zen student way, the best-advice way I imagined I must take and yet somehow couldn't.

And then one day, a koan pounced without any particular effort -- leaped on my back and proceeded to make a meal of me. The line might be old and infirm and slower than it once was in the predatory pecking order, but here was a koan that sank its claws and teeth into me.

As far as I knew, the line had no place in the revered texts. It just hung out in my mind like some saucy teenager leaning against a lamp post, smoking a cigarette, asserting its power without ever moving a muscle. There was no solution and no escape.

Not that I could 'solve' it any better than I could 'solve' the sound of one hand clapping, but still, this koan was close to the bone -- a real marrow-muncher. Fuck the commentary. Fuck the answers. Fuck everything and anything else. "I love you."

No, I never did become a good Zen student and tigers, man-eating and otherwise, still scare the crap out of me. But I did get some hint that when anyone bleeds, the blood is red.

No need to seek out or memorize or mythologize or aggrandize koans. They come creeping and tip-toeing until, until, until ... well, even an old fart still has claws.
Posted by genkaku at 9:56 AM