The heatwave of the last week or so (temperatures in the 90's and humidity to ice the cake) is so huge ... imposing an inescapably bright and meaningless meaning to the word
Vanquish.
No place to run and sucking all willingness from the fantasy that there might be someone to do the running.

I guess it makes me a little crazy, but I am not sure whether the craziness is crazy or a more serious sane. Too hot to be crazy. Too hot to be sane.
Vanquish.

Yesterday, because things are financially tight, I thought I might beg for donations on the blog. It would certainly help, but it also made me wonder on what basis, in hard times, I might rightfully ask for such a thing. I didn't have the energy to play violins and make up reasons or even feel especially sorry for myself: I just wondered, who am I to ask?

And for some reason that train of thought led me to search out photos that might give some clue. It was an exercise in belly-button lint, perhaps, but at my age, belly button lint is not so bad ... comes and goes like other vanquished items.

When I was a kid -- 4,5,6, something like that -- my mother took me to a professional photographer to have pictures taken. I didn't quite understand why, but I knew what I felt and what I felt was a deep sense of embarrassment combined -- far worse -- with a feeling I was being pimped out ... that I was being asked to be something I wasn't so that I could be more than I was. The 'worse' part was some recognition, whether true or false, that what I was was not quite enough in my mother's eyes, that being myself was undeserving: In order to be worthy, I had to be what I was not and in the process what I was was left vanquished and marginalized and profoundly sad. Why was what I was not quite good enough? Why was it necessary to be what I was not in order to be accepted and at peace?

I guess it's called growing up -- trying to be what anyone is not in order to know who they are ... only to come back gasping from exertion to the question of why being what they already are is insufficient and, sometimes, entirely lost in the world of improvements.

If a picture, to quote the Chinese, "is worth 10,000 words," I have a hunch that 10,000 (infinite) words will never be enough. Ten thousand words, after all, is just another version of growing up -- of trying to be who you are-not in a vanquished effort to find out and rest easy with who you are.

Even today, I don't much care for looking at pictures of myself. There is some lingering sense of pretending to be what I am not ... and yet am. It is a challenge ... like swallowing castor oil. 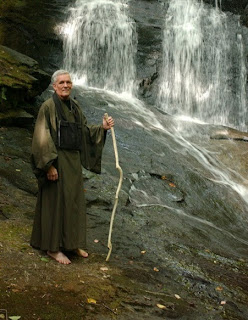 So many 10,000 words spliced between so many other 10,000 words. The in-between's are vanquished and perhaps only John Lennon makes some sense: "Life is what happens to you while you're busy making other plans."

No need to sell out who you are for who you think you are ... that something else that is invariably vanquished before the get-go.
Posted by genkaku at 8:57 AM