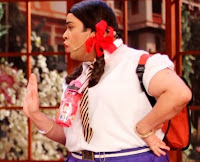 Indian comedian Kiku Sharda has been arrested for mimicking a popular religious guru.
The actor has been sent to judicial custody for two weeks for allegedly hurting the "religious sentiments" of Gurmeet Ram Rahim Singh's followers.
Sharda mimicked the guru in a TV appearance on 27 December.


The comedian apologized, but a spokesman for the guru's ashram was quoted as saying, "you cannot commit a crime and apologise. The law has no such provision."

So much for the compassion that wends its way through some spiritual persuasions.

Why is it that people or institutions who claw their way into the human spotlight seem to be invariably endowed with a dumbass gene that is astounded when some dare to question or spoof their ascendancy? Religion is pretty good at this, but is hardly alone.
Posted by genkaku at 8:40 AM